Well! Good news!
Kaden passed his second swallow study as of April.
He did so wonderful, not a single drop fell into his tiny little lungs (:
I am so proud of him. He can now have full bottle feeds every day, any time he wants, any way he wants! And he is fully loving every bit of it.
As of today, he weighs 8 lbs 5 oz.
That's half the size he was when he was born!
Just took him 6 months to catch up (;
You should see him now.
He's kicking & throwing his rattle around like it's nobody's business. NOT TO MENTION he's talking now!
Well, a bit (:
He says alot of soft sounds and will sometimes make some bubbles for mommy. About an hour ago he actually FULL BLOWN laughed for me! It was so ADORABLE!! and heart breaking at the same time.

He is finally on a PAM schedule where he receives at Cook's Children's Hospital in Forth Worth, TX.
The hospital is kindof disorganized. The staff literally have the slightest bit of knowledge for communication. Ugh. Frustrating.
But, they are the only ones who will do his treatments. So therefore, I have to hold my tongue.
:/
OH! We're in the process of  getting together a "sleep study" for him, just to be cautious. I hear from alot of mothers sleep apnea is very common with OI.
Might as well catch it while there's somethin to catch.

Posted by Unknown at 9:10 PM No comments:

I am becoming more and more frustrated. It seems as though we need more
help out here, more specialists who KNOW what the hell they are doing.
Like for example, ECI (Early Childhood Intervention) visited us this afternoon.
Apparently, the dietician thinks we need to bump Kaden's feed up 5mL every week.
Which is sortof impossible considering his belly is the size of a grapefruit. Literally.
She seems to think he's growing wayyy too slow and it doesn't add up to the standards of
the formal growth chart.
All I'm thinking is: If a baby has a bone disease, meaning the bones are very brittle and
gaining alot of weight would mean putting more pressure on those bones,
would that not  be dangerous?! Dumbass?

Sometimes I wish I was ghetto and not polite AT ALL.

But, regardless of what she says I stick with my gut feeling, and it tells me
his little belly hurts after he eats even 55mL every feed. So, lastly.. she can suck it.

we are truely EXCITED because Kaden is having his second swallow
study since he was 3 weeks old. Now, basically a swallow study is an x-ray of the esophogaus
(spell check?) that will be able to inform the OT if he is aspirating his formula still.
(Milk going into the lungs). His last swallow study showed that just a teeny weeeny bit
would fall out of the lining of his throat into his lungs, making a "junky" sound in his
chest and throat. We're hoping since now he is 5 months old (GOSH he's getting so old, so fast!)
that he will have built up a stronger development of his swallow. Therefore, he will be able
to FINALLY bottle feed again. 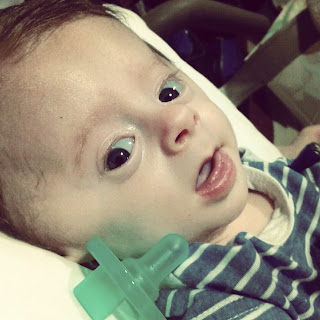 And removement of the mickey button WILL BE MADE!

XD
So, stick with me and I will let you guys know how it goes!
Love ya!

Posted by Unknown at 6:21 PM No comments: 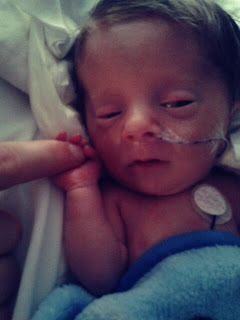 He was diagnosed with Osteogenesis Imperfecta Type 3 at 4 weeks old.
Doctors told me repeatedly in utero that my son Kaden had a 95% chance of breathing at birth.
It wasn't until the morning of February 24th, after I had heard that gracious cry..
that I had no doubt this little man was a fighter.
Kaden remained in the NICU for 5 weeks after birth.
About 3 weeks after bottle-feeding on breastmilk, the OT/PT became very concerned about
this "junkiness" noise in Kaden's throat.
She then scheduled whats called a "swallow study" to examine his feeding by xray of the esophogaus.
During the examination, it revealed that Kaden had been aspirating his bottle feeds.
Meaning, little at a time the milk would run into his lungs which can cause pnemonia.
Emidiately, Dr. Julie scheduled for Kaden to have a gastrostomy tube (also called a G-tube) It's a small, thin tube inserted through the abdomen that delivers nutrition directly to the stomach. It's one of the ways doctors can make sure kids with trouble eating get the fluid and calories they need to grow. He would have to keep this in until his next swallow study.
Which is still in the process of happening -_-

Kaden did very well with this. But, I could see that he truely missed being able to fulfill his suction needs. So, we devised a "cold stim" plan.
Basically, so Kaden would still establish getting full with sucking on his paci he would not "forget".
Everytime he eats now I soak his paci in ice, cold water and he LOVES it to pieces (;

The nurses at Medical City Childrens of Dallas treated him as if he were a normal infant, which was defying to my boyfriend and I.
We KNEW he was in pain, and we would tell them over & over again to go slower.. take their time.
It took me being their every day to make sure each & every nurse that looked after him knew what the hell they were doing.
After nearly 5 weeks in the NICU, he had faced his first (out of uetero) fracture.
It was the night before discharge, after one of the nurses "sponge bath".
Dr. Shah called in the OT/PT to stitch a sling for his little right arm, where it had to remain neutral
against his chest for healing.
We were mortified, of course. But we knew it would not be an easy road from there.
He had finally come home to us the day after. Safe & sound.

After 2 months of being at home with Kaden, I decided to let my job go.
Kaden needed a full-time mommy & teacher, and working at the SPCA of Texas was not going
to give me much time for that. Besides, you think I would trust anyone else with him?
HA. Good one (;
A few weeks after, Kaden had fractured his left arm.
One morning we noticed him imbolizing it against his body, which is a definite sign for a fx.
We took him tothe ER at Medical City where we waited for 2 HOURS to be seen.
Ridiculous.
The things Kelby and I put up with -_-

In April, I joined a group on Facebook called "OI Parents" where Chelsea Lush and Amber Gaskill guided me to the Children's Hospital of Omaha in Nebraska where they actually have an OI Clinic there! the only one in the COUNTRY! They also informed me about a treatment with "Pamidronate" (PAM for short) would help sub for collagen in KAden's bones that can help reduce fx and pain! I was toooo excited about this opportunity to meet with doctors and trained specialist that HAD A CLUE about what Kaden is going through.
SO! June 13th, My mother and I set out to Omaha.
Kaden did very well for a 2 hour flight to St. Louis then 2 hours to Omaha!
When we arrived, we had our stay at The Rainbow House. It is located near the hospital to provide overnight or extended day accommodations to parents and family members of children receiving treatment at Children's. The woman that ran the whole shin-dig was very generous.  She would cook meals throughout the day for the parents and children staying in her 3 story house! It was beyond amazing.

The next day, we were seen by a couple of the OI Clinic's staff. They had a look at Kaden and decided he was type 3/4 moderate. They talked to us about the in's and out's of Pamidronate and how he would be receiving it every 8 weeks until he stopped growing. Which is guesstimated around 17/18 years old.
That night.. he got his first dose. 50 ml of pure bone juice!
Ever since then, he's been a completely different baby.

Since day 1, Kaden has done nothing but fight all odds against every obstacle.
He has begun to "coo" and pull and grab toys and he keeps COMPLETE eye contact on each person speaking to him 24/7. He's starting to SMILE and laugh a little, which makes us just melt. It's literally too beautiful (:
He is one social butterfly! {;
So! Stick around, I will be updating every chance I get! 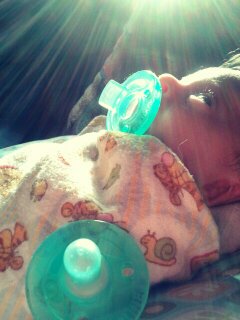